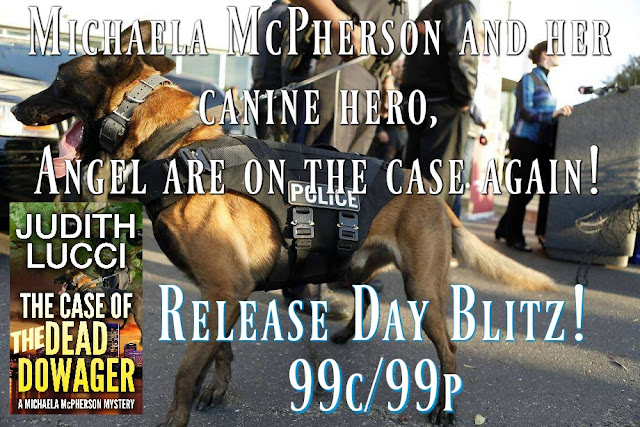 Retired homicide detective Michaela McPherson and the aging Countess Dorothy Borghase team up again—this time to match wits with two serial killers stalking children, women and the elderly.
When Dottie Borghase's friend Camilla Rothrock collapses at a lunch gathering of old friends, the countess's only concern is to dial 911 for help. But Camilla's subsequent death has authorities buzzing about international safety and retaliation, because her son is decorated U.S. Army General Stuart Rothrock. 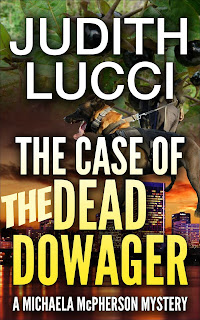 As other restaurant patrons in Richmond meet similar fates, Michaela and Dottie join forces with the Richmond Police and the FBI to track down the pair of heinous murderers. But in order to catch the killers, they will put their own lives and the lives of others in in serious jeopardy.What Price Must a City Pay to Keep its Citizen's Safe?

How about an excerpt:
Dottie turned off the main highway and headed south to Blackstone Virginia. Madame Toulescent lived just outside of Blackstone and that's where she conducted her psychic readings. She wished away the butterflies that cramped her stomach. She had a sense that what she was going to hear wasn’t good. She wished she didn't believe in the value of psychics or the unknown but she did, and that was that. She’d seen psychic readings and prophecies come true time after time during her life. Mic wasn’t a believer at all but had grudgingly admitted psychics had helped them in a case about ten years ago.

The speedometer on her car registered over sixty miles an hour on a forty-five mile limit stretch of highway. I'd better slow down. The last thing I need is a Virginia state trooper on my tail. She braked and her car skidded but she handled it skillfully. The Cadillac was a big, monster car but she really liked it. Since Dottie had lived in the US, she had always preferred German-made cars and previously owned multiple Mercedes Benz. Of course, when Count Borghase had been alive, they’d always driven Italian cars, mainly Ferraris. But now she was pretty much American and she loved her Caddy. There was something about the Cadillac that was so plush and so American that she bought a new one every couple of years.

She saw an old gray mule in the pasture out of the corner of her eye and saw the fence that was lying on the side. Dottie didn’t know what she’d do if they ever repaired that fence. She’d been looking at that fence on the ground for years and it was her landmark just before she turned onto Madame’s private road. She knew her turn was just up ahead. She slowed for a farmer carrying a load of hay in an old truck. He was hogging the entire road. Now where in the hell am I supposed to go? She steered her big car to the side of the road as far as she could without falling into the ditch. She cursed and held her breath as the farmer passed her. She swore the farmer missed her by less than an inch. The old codger hadn't even looked her way. She shook her head and cursed again softly. She threw her white Caddy into first gear and roared out of the ditch spewing gravel, dirt, and mud all over the road. She saw three rabbits running for their life and hoped she hadn’t interrupted their nest. Dottie drove a little further and made her left turn. She turned right on the first road and started the difficult trip along the horrible, rutted road to Madame Toulescent’s tiny home. The road was almost a mile long. Dottie's tall, thin frame bounced all over her plush leather seat and her hair fell out of her neatly arranged bun. I'm going to have to take a pain pill. All this jumping around is killing my hips. Secretly Dottie new she needed to have her hips replaced but there was no way she was willing to do that, at least not while she could walk. I wouldn't be able to help Michaela. And then, what would she do?

Madame Toulescent waved at Dottie from her front porch filled with flowers and beautiful hanging baskets of petunias and begonias. Her small white cottage was immaculate. Madame Toulescent watched her painstakingly steer her huge Cadillac down her battered road. Dottie brought the iron beast to a stop, looked in her rearview mirror and re-pinned a piece of white hair that had worked its way out of her perfect updo. Even though the Madame lived in a house that was little better than a house trailer, Dottie had been trained from birth to always look perfect when visiting. This task had become monumental at age 82. She reached for her purse and checked to make sure her Glock was nestled in its special pocket. She checked her lipstick in the mirror, pinched her lips together, cursed the fine lines around her mouth and got out of the car.

"Hello Madame Toulescent. Thank you for seeing me today on short notice." Dorothy smiled her gracious smile at the psychic, showing her beautiful white veneers, once available for a large price from the famous, dentist-to-the-stars Dr. Michael Smirkowitz.

"You are so welcome, Countess Borghase." Madame Toulescent looked around the empty fields and through the trees and gestured with her arm. "As you can see, there is no waiting line. Please come in. I've made us some tea." She paused for a moment and said, "Watch the steps. They're in need of repair," she cautioned.

In need of repair, my butt, they need to be rebuilt Dottie climbed the rickety steps dodging rusty nails and wood splinters. She grasped the loose railing and posts that held up the old front porch. The last thing she wanted to do was fall and break something. She followed Madame Toulescent into her small but neat and cozy home. There was a wonderful scent in the air and Dottie’s mouth watered.

"Please have a seat in the easy chair," the Madame offered. "I'll bring us some tea and sweet bread."

Dottie nodded and smiled her thanks as she carefully studied Madame Toulescent. She wasn't sure of her nationality. She thought she was Eastern European but she seemed very much like the French and her house had several amazing pieces of French country furniture. In years past, she had asked the Madame about her former life, but the psychic seemed unwilling to share her past. Her voice had a strange accent Dottie couldn't identify which frustrated her. Dottie had traveled the world and she knew the languages and dialects of most ethnic populations. But she couldn't figure out Madame Toulescent’s origins. That puzzled her.

Madame handed Dottie a cup of herb tea. The aroma alerted her senses and she immediately felt more awake and inspired. The tea had given her energy and awareness. She took a sip. It was delicious.

"Oh my, Madame Toulescent. Whatever is in this tea? I feel a million times better just from smelling it. You’ve got to tell me where you got it because I know Cookie would love it too," Dottie gushed as she sipped her tea.

Madame Toulescent smiled and said. "I made the tea. It's a blend of ginger, mint, lemon verbena and a few other things I grow in my herb garden. I'll send some home with you. It's sweetened with honey I collected from my bees yesterday." She smiled briefly, and her lips stretched over teeth that could benefit from a cosmetic dentist. "That's probably what you love so much."

Dottie nodded and studied the Madame. The years hadn't treated her so well. Dottie didn't know her age but her face was a mass of wrinkles that blended one into the other. Dottie guessed each wrinkle had its own story. Her skin appeared soft but deeply creased. Her jet black hair was streaked with gray and hung freely past her shoulders. She wore a simple blue shift with a silver belt and wore tennis shoes and socks. She smelled of lemon and freesia.

Dottie, as usual, smelled of Chanel #5. "It's so lovely out here, Madame. Do you ever come to town?"

Madame Toulescent shook her head. "Very rarely. My neighbor collects my groceries for me when I need them and as you know, I have a huge vegetable garden and I can and freeze most everything I need. I like it here and I like to stay with my animals - my dogs, cats, cow, mules and horses. It's quiet here and my love is nature."

Dottie nodded. She couldn't imagine staying in these four walls every single day. She supposed she didn't have the patience and gentleness of spirit that the Madame had. But that was okay. Dottie was very happy in her own way.

The two women shared a comfortable silence and continued to sip their tea until the Madame asked, "How can I help you today, Countess?" She smiled at her and said, "I can tell you have some significant things on your mind and that you are troubled."

Dottie put her teacup down and said, "Yes, I do. Have you been watching the news?" Dottie saw the woman pale under her sun-darkened skin.

Madame Toulescent nodded. "You’re here about the poisonings, aren't you?"

Dottie held Madame’s dark eyes with her own and said, "Yes, I am. Camilla Rothrock was one of my dearest friends and I need to know who poisoned her."

Madame shifted her gaze to the floor and said, "Countess Borghase, this is a very bad business that is happening. I've had some visions and they are upsetting. It reminds me of the evil work of Hitler in Germany."

This time it was Dottie who paled, her heart beating so hard she could hardly breathe. "Oh my God, Madame. We both remember his devastation in Europe and the millions of people he murdered."

Madame Toulescent rubbed her hands together, her face grim. "Indeed we do. A sad and sorry time. Let's move into the back where I work and see what we can see."

Dottie stood and followed Madame to the room in the far back of her modest home. It was a glass room with beautiful views into the forest. She left her teacup on the coffee table. Her heart thumped dangerously in her chest and she was short of breath. She was so terrified she almost lost her balance. She gripped her purse and cell phone in her hand. She was scared and just the idea of having the Glock made her feel safer. Could the evil be so strong it permeated her soul?

“Countess, why are you so upset? What can I do to help you?” Madame Toulescent looked at Dottie with concern.

Dottie stared at her but her eyes said it all.

“Let me get you something to calm you down so we can have a good reading. Please stay in the chair and I’ll be right back,” Madame Toulescent said as she left Dottie and walked to her kitchen.
Want To Read More? Read Chapter 35 here!

Read more »
Posted by Judith Lucci at 2:00 PM No comments: